Engineer of this month award, Dec 2010 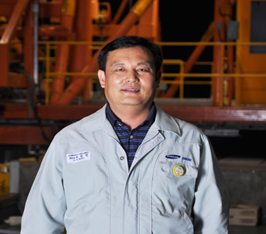 □Mr. Sung-Sun You who concentrated his efforts on improving the functions of ships and offshore constructions as a chief researcher of Samsung Heavy Industries Co., Ltd, was awarded “Engineer of this month, December 2010” because he developed world best towing tank test system and analyzing method of model test.

○ In particular, the developed ship performance evaluation test system is applied to develop new ships and offshore construction such as floating offshore facilities like drillship and floating production storage and offloading and large containers and LNG vessels. This fact was considered that it contributed to develop the high quality products.

□ Mr. Jin-Lim Choi improved the manufacturing process of stainless steel flexible tube which was developed in advanced countries as a higher value-added product with his own technical skills and succeeded in exporting the world best stainless steel corrugated tube to advanced industrial countries.

○ Even though Mr. Jin-Lim Choi is very old, he is acting as a technical consultant of FM (Factory Mutual) which is one of American quality certification organizations and is concentrating his efforts on new technical skills which can apply to various stainless steel products.

□ Dong-a Flexible Metal Tubes Co., Ltd which was established in 1982 is manufacturing stainless steel corrugated tubes (annular type & helical type) only and providing them all over the world. They obtained UK original ISO9001-2000 quality management system and other foreign quality certifications. So this company is a promising company which is growing and pushing into American, Japanese market and European market such as Germany, UK, and France.

□”Engineer of this month” has been given since July in 2002 in order to raise the pride of engineers and treat them with preference by finding the excellent engineers and awarding them who contribute to international competitiveness and industrial development through technical innovation at industrial sites. This award is given to an engineer from a conglomerate and a middle-sized company with Ministry of education’s awards, a trophy and a prize of 10 million won every month.

Want to join the discussion?
Feel free to contribute!

Engineer of this month award, Dec 2010
Scroll to top